Professor Muhammad Yunus was the special guest at a gathering organised by Grameen-Jameel on the 16th February 2015 in Cairo, to discuss the new Egyptian microfinance law and the development of the microfinance industry in the Arab region and beyond. In conjunction with his presence in Egypt for the “Conference of the Egyptian and Arab Woman 2030” hosted by Nisf El-Dunia - Al Ahram Group, Grameen-Jameel took the chance to invite the father of microfinance to share with the major key players the challenges and opportunities offered by the new law, to reflect on where the microfinance industry stands and to inspire from each other for new innovations to better serve poor clients.

The meeting was attended by senior representatives of governments and various international and financial institutions such as EFSA in the person of the Chairman Mr. Sherif Samy, World Bank, IFC, the Arab African International Bank, Banque du Caire, GIZ, Embassy of Switzerland, Egyptian MFIs, IESC Sanabel and CGAP.

“Poor people are like bonsai trees. When you plant the best seed from the tallest tree in a tiny flowerpot, you get a replica of the tallest tree, only inches tall. There is nothing wrong with the seed you planted; only the soil base that you gave it is inadequate. Poor people are bonsai people. There is nothing wrong with their seeds, but society never gave them the proper base to grow in. All it takes to get poor people out of poverty is for us to create an enabling environment for them.”

With this inspiring quote from Prof. Yunus’ book Building the Social Business, Deputy General Manager Ms. Fatina Abu Okab opened the meeting, highlighting all the needs to be addressed in order to better serve the poor. Grameen-Jameel has been very active in Egypt providing financing and technical assistance for the capacity building of the MFI partners to achieve operational and financial sustainability. Furthermore, Grameen-Jameel has played an active role in the whole microfinance sector in the Arab region through partnerships with 21 MFIs in 11 countries and the support to Sanabel network and Arabic Microfinance Gateway.

Multiple initiatives and partnerships have been launched in the last years in order to engage the private sector in microfinance and to expand the range and quality of services available for low-income communities: micro-insurances with AXA, crowdfunding with Kiva, Affordable Technology for the poor with D-Lab and MIT University, Bankers without Borders program with Grameen Foundation and much more to be further developed.

The Nobel laureate Prof. Yunus has inspired the participants with his wide reflections and intense commitment in promoting social business. From its start, back in the ’70 in rural villages of Bangladesh, Grameen’s intervention has tremendously expanded from lending into saving, pension fund, a telephone company for the poor - Grameenphone, a social business fund for young entrepreneurs and so on. For Yunus the explanation of this expansion is quite simple and clear: listening to the needs of the poor and create new strategies and services to push them forward.

The discussion about different models, methodologies, words and concepts used in microfinance has been really livened up among the participants, especially for the concern of having the acknowledgement of their work and the possibilities to effectively serve their clients. To this regard, the inability for the MFIs to collect savings, in force in the regulations of many countries in MENA region, has been mentioned as a serious constraint.

Coming to the consideration of the new microfinance in Egypt, Prof. Yunus has stated that good intentions and a remarkable effort have been infused by the regulator to enable the MFIs to work in a better environment. Moreover, the law is short and can be largely improved and elaborated through the draft of specific rules and procedures. It’s up to MFIs, stakeholders and key players to collectively reflect to this regard and come up with suggestions and recommendations. The law, in fact, is a tool not to deny or bring back microfinance intervention but rather a framework to improve the industry and to better protect the clients. He also advised for a separate regulatory authority to oversee microcredit institutions than the one regulating conventional banks. 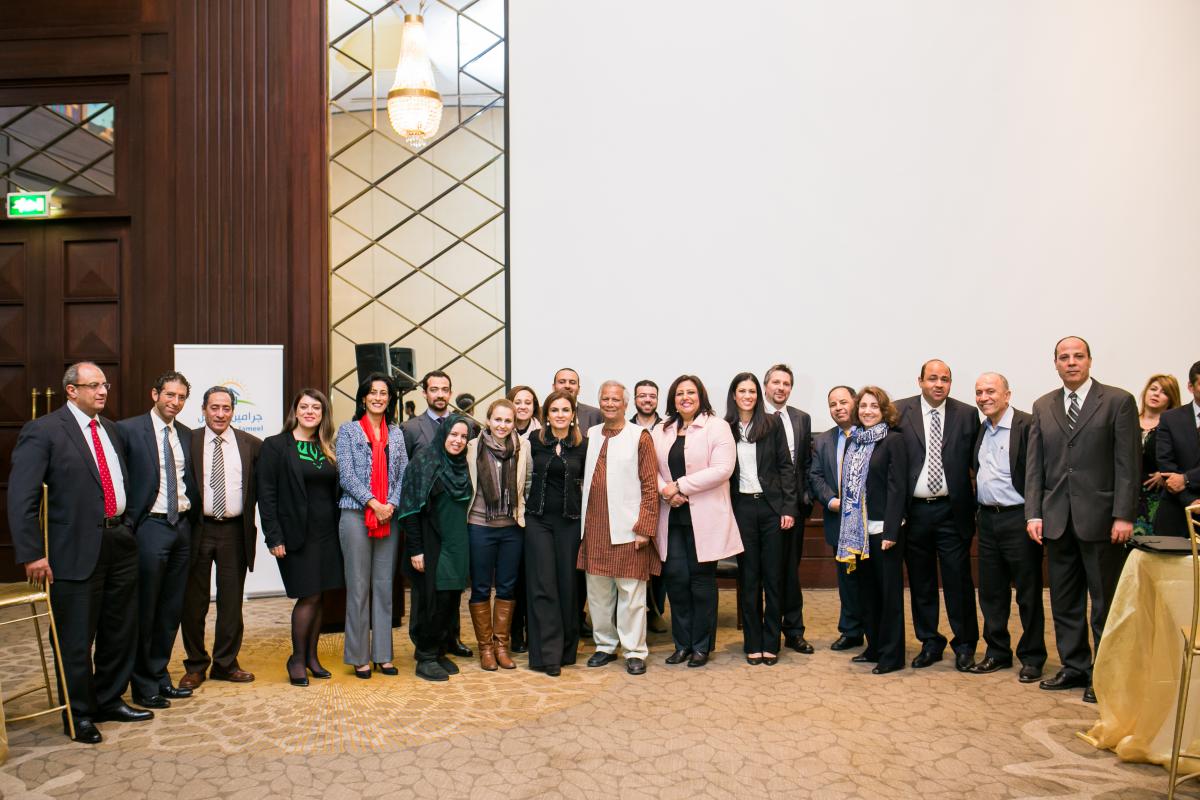 In his final thought, Prof. Yunus has suggested to the organizations working in microfinance to experiment and gradually learn how to do better in order to create MF banks aiming to sustainability and responding to their mission. No matter of the terms or the methodologies we use, enhance the lives of the poor we served is our common goal.

Patrizia Dodaro is Grameen-Jameel's Business Development and Strategy Fellow. She is based in the United Arab Emirates.