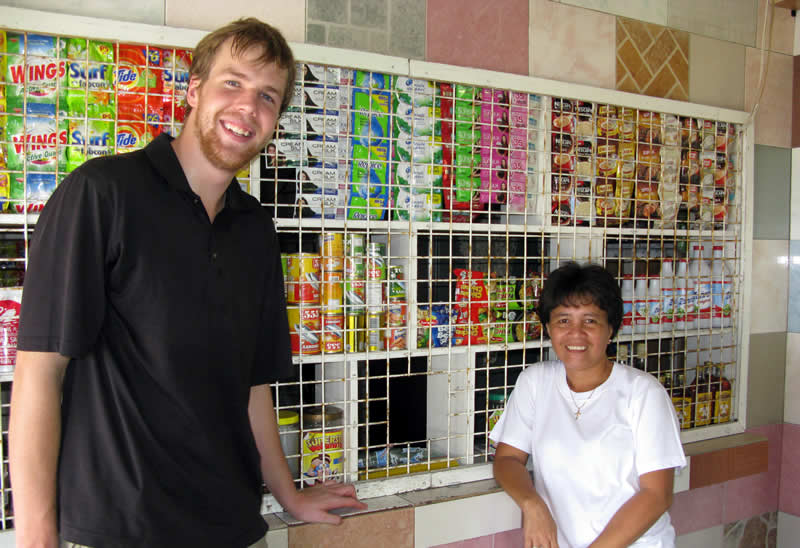 It’s a bit crazy to think that there are parts of the world where you can pick up a cell phone and be digitally connected to anywhere on the planet, yet there are no readily accessible financial services. In the rural Philippines, this is just the case. It’s exciting that here at Grameen Foundation we are working to develop rural financial infrastructure in the Philippines through innovative methods and mobile technology.

As a Grameen Foundation Fellow, I work on a project to develop small local convenience stores in the rural Philippines (called Sari-Sari stores) into agents for a last-mile mobile financial services network. Sari-Sari stores are almost exclusively individually owned and operated. They sell common items such as shampoo and soap, crackers, soda, beer, or perhaps vegetables that they or a neighbor grew. There are over a million of these in the Philippines, so they are on nearly every block throughout the entire country. Imagine every fast food restaurant in the United States including Subway, Pizza Hut, McDonalds, Burger King, Wendy’s, and everything in between. Now take every one of those in the United States and pack them all into a land area the size of New Mexico. They are present even in the most remote areas of the country.

When I first went to the Philippines with Grameen Foundation in 2013 (as an intern), I became fascinated with these stores and their potential to provide last-mile services. A year later, I found my way back to the Philippines through a Fulbright grant from the U.S. Department of State to complete a project entitled Mobile Money: Utilizing the Sari-Sari Store Network of the Philippines. Nearly fifteen-hundred interviews later (over half of whom were Sari-Sari store owners) I had data which could be used to profile stores that would meet our criteria for the up-and-coming Community Agent Network (CAN) project that I now work on back at Grameen Foundation as a fellow.

Using data collected during my Fulbright project and my fellowship with Grameen Foundation, I’m helping create algorithmic survey tools to recruit agents in rural areas into the system. We’re able to heat-map local demand for financial services, cell phone coverage, and existing financial infrastructure (if there is any). We then survey the sari-sari stores in the area using survey tools designed to find the most significant characteristics that indicate successful community-oriented stores. It’s a complex task, but using data this way allows us to identify the areas where we can really make an impact.

The Grameen Foundation Fellowship has given me the chance to transform my research into on-the-ground impact. Data can solve a lot of the world’s problems, but only if it is put into use. Grameen Foundation collects and uses data at every step of our programs. The use of data enables us to target the poorest more efficiently and ensure that our programs are having the intended impacts on the most vulnerable populations.

Learn how YOU can spend a year in the field working with some of the brightest minds in social innovation!